The changes in Kristi are becoming more apparent as her physical appearance is starting to change.  The most noticeable change I saw today was in her arms.  Her face is appearing thinner but her arms have become very bony.  It was probably a gradual progression all week but I just noticed her arms today.  It startled me when I noticed them;  freaked me out.  I had to leave her room and go cry in the hallway.  I didn't know what else to do. 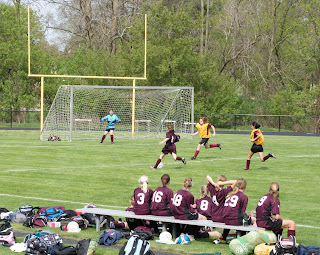 When I told her about them she looked like she knew what I was talking about and acted like she wanted to see them.  I got excited and was going to get the laptop when she started talking about something I couldn't understand.  When I asked her about the pictures again she said "what pictures?  Oh I'm so confused.  What am I supposed to do?" and she started talking about wanting to "go right now".  Sigh.  Thought I had her back for a moment.  I know, I know.  I need to let go; and I have...for the most part...but every now and then she appears very coherent and it's so nice to get those moments...just wish they would last...like another 40 years maybe.

Speaking of pictures, here is a picture of our weekend getaway about 3 weekends ago.  We received an anonymous gift of a 2 night stay at the downtown Grand Rapids JW Marriott.  It was the week leading up to this getaway weekend when Kristi's pain really began to intensify.  Even though Kristi was in a great deal of pain all weekend and spent most of it in bed, we did have a great time.  We had adjoining rooms which made it very convenient for having a "boys' room and girls' room" for the first night and the 2nd night Nathan and I had "movie night" in mom and dad's room.  After the movie I kicked Nathan out of course in exchange for Kristi.  :)  Anyway, here is a family picture I took as we were packing up to leave. 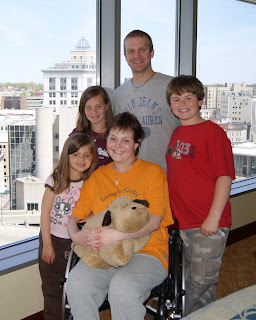 Thank you to the anonymous donors!

Where in the world?!

"God is our refuge and strength, an ever present help in trouble." Psalm 46:1

Feel free to send us a comment at bkrogalske@gmail.com